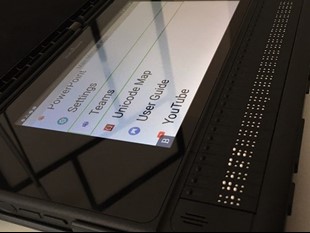 Are you a student learning to use non-visual access technology? PRCVI invites you to join our Student-Directed Outreach series focused on Non-Visual Access Technology!

Join the PRCVI outreach team and fellow students for sessions focused on learning non-visual accesses technology skills. Each session will focus on a specific AT-related theme. After a brief introduction to the week’s theme and a few examples over screen sharing, discussion will focus on answering questions from students as well as sharing of information, strategies, and solutions. The exact content of each session will be directed by student questions and needs.

All sessions will be held on Zoom - connection information posted to the BC TSVI Yammer account each Monday.

Students are encouraged to email in their questions ahead of time and to bring any questions, experiences, or strategies they have already developed to share with the group. Emails can be sent directly to Jen Jesso at jjesso@prcvi.org

April 27, 2021 - File and Folder Management on the BrailleNote Touch Plus

These notes summarize the sessions held on April 20 and April 27, both of which focused on file and folder management using the BrailleNote Touch Plus. In these sessions, we learned how to create folders and how to copy, cut (move), and paste files to organize our work. Below are note and commands:

Thursday, March 4, 2021 - Using the BrailleNote Touch Plus for Research

In this session, we covered information and strategies that can be helpful when using the BrailleNote Touch Plus to conduct research. We covered how to search Google, how to copy and paste text (from online and inside a document), and how to open two word processor documents at once (one as a notes scratchpad, one as a document being written).

This week we looked at how to navigate online using Chrome on the BrailleNote Touch.

We talked about how navigation online (while in "web content") is a bit different form navigation in the rest of the BrailleNote. Usually, you can use first-letter navigation to jump to items (for example, pressing E for email or I for internet in the Main Menu). But while in web content in Chrome, letters are used to navigate to various HTML elements (for example, E will jump to the next editable field, and I will jump to the next list item).

We covered the following commands in today's session:

Note that when typing in a web address or search term, "computer braille" must be used. Computer braille does not use contractions or capital indicators (a capital letter can be typed by pressing dot 7 in conjunction with a letter), numbers are brailled without a number sign in the lower part of the cell (for example, 1 would be dot 2, 4 would be dots 2-5-6, 8 would be dots 2-3-6), and some punctuation marks are different (for example, forward slash is dots 3-4, period is dots 4-6).

This session focused on using iOS gestures on the iPad touchscreen. We reviewed the basics, and then learned some more advanced commands. Here's what was covered:

We had another great session where we reviewed the VoiceOver braille commands covered in the previous session, and also covered an introduction to using the Rotor and editing text. (See the guides on VoiceOver Rotor Overview and Customization for more information on the Rotor.)

The Rotor is a feature that allows you to quickly move to different elements on the screen. The contents of the Rotor will change based on the app being used. For example, using the Rotor on the Home screen will have different options than using the Rotor on a website. The following commands were covered

We also covered an introduction to editing text. When on an edit field, you need to make sure that VoiceOver says "is editing" and/or that a blinking cursor appears on your braille display to ensure you're ready to edit text—otherwise you will not be able to type text. The cursor appears between two letters, and is shown on the braille display with dot 8 of the first cell raised and dot 7 of the second cell raised (the visual blinking cursor appears between those two cells).

The second method of selecting text is to use the following commands with the Rotor set to Text Selection. You will notice that the below commands are the same as the Rotor commands outlined above; to use these commands as normal for other Rotor functions, the Rotor must be moved away from Text Selection first with Dots 2-3 plus space or Dots 5-6 plus space.

Retrun to the top of the page